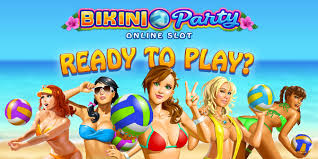 I am sure I have your attention after you read the headline! I am here to deliver the good news that not all slot games are about fruit symbols or twinkling stars. There are many slots out there with some edge and interesting characters, and a theme that keeps you wide awake, regardless of the time of the day that you are playing.

This is definitely a slot game with an adult theme. The background of the game is a still from the famous central European street, and the symbols found in the reels are for players with an open mind and mood for something different.

This game features harps and bells, but also angels that seem to be in a cheeky mood. Landing three of these cheeky angel symbols will get you nice winnings!

This Microgaming slot has been targeted at the male audience. While the reels are spinning, symbols of beach volley girls wearing bikinis and making suggestive faces appear on the screen.

The symbols in the game include rings, metal-themed hearts and roses, and a lady’s face. Once you land the latter, she reveals her whole body, wearing just lingerie.

This game from Mr. Slotty comes with a theme that one may not want to play while in the office. The visual side consists of different body parts of tattooed girls, from their legs to their cleavage.

This game takes place in the gentlemen’s club and features female characters in various stages of undress. Let the night out begin!

As soon as you enter the game, you are greeted by traditional French music. The symbols include the Eiffel Tower. But the main attraction of the game is the three French maids that seem to be more interested in flirting with the player than cleaning.

When the slot game features a 69, a mouth and a miss wet t-shirt as symbols, you know you are onto something exciting. This game from Espresso also comes with Caribbean rhythms and two young women in revealing bikinis.

This game from Gameplay introduces you to the ancient Chinese Emperor and his many concubines. You get to peek into the scenes of the Chinese history that are not known for everybody.

This cheeky slot game is all about the behind! The game’s soundtrack is hip-hop music, and the symbols are nothing less than female behinds. Should you land three of the same symbols in one row, the twerking begins.

Not only are these slots a nice way to relax after a long day at work, but they also have real jackpot potential. You can kick back, enjoy a gaming experience that is different and fun, and if the luck is on your side, leave the game as a winner!