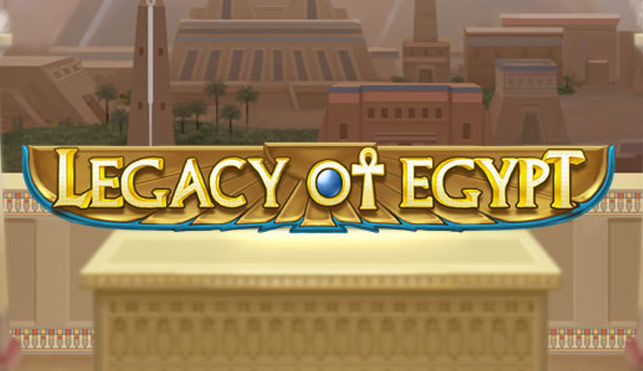 Top gaming software provider Play’n Go’s new pokie isn’t the first Egyptian themed pokie and it probably won’t be the last, but let’s see how this new slot game stacks up against the others. Legacy of Egypt wants to take you on a journey to Ancient Egypt to interact with powerful Egyptian leaders and ancient Gods.

Maybe it’s the exotic location, or the fact that Egypt was once one of the most powerful ancient civilizations or perhaps it’s the fact that Egyptian tombs and pyramids are synonymous with hidden treasure and wealth. But Egyptian themed online pokies games are mighty popular. There’s Microgaming’s Throne of Egypt, NetEnt’s Egyptian Heroes, Play’n GO’s Leprechaun goes Egypt Slot or RTG’s Cleopatra’s Gold and that’s only a handful of the many Egyptian-themed pokies games.

This latest Play’n GO offering has a release date of April 25th, so if you want to give it a go, head down to Play’n Go casinos now to get spinning.

History of Ancient Gods
Some of the most mysterious and powerful Gods like Osiris, Anubis or Amon-Ra controlled every element of ancient Egyptian life and in Legacy of Egypt, these Gods will control your fortune on all 5 reels. The game plays over 30 paylines and in addition to powerful Egyptian Gods, classic Egyptian-themed symbols like scarab-beetles and pyramids will be part of your gameplay. All in all, this is an aesthetically pleasing game with lots of features and immersive gameplay.

The lower value lines are made up of traditional playing card symbols which become animated when you score a winning combination. All this action plays out against a stunning backdrop of ancient temples displaying Egypt’s immense power and wealth.

Spin for Ancient Egyptian Treasure
This game can be pretty rewarding—if you’re lucky you can multiply your stake by up to 5000 times. As if this isn’t enough reason to spin those reels, there are also plenty of retriggers and bonus features to keep you spinning on.

The creators have also added a Wheel of Gods on which you can access a number of extra bonus games. Here you’ll find lots of multipliers, additional wild symbols and up to 20 added spins.

Play’n Go’s new slot game is highly entertaining. Some of our game reviewers said it reminded them of a crossover between the Montezuma slot from WMS and the NRVNA slot powered by NetEnt. powered Nrvna pokie. We suggest visiting any online casino that offers Play’n GO games and giving this one a spin.