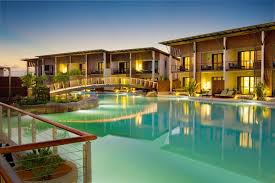 New Zealand Casino in Darwin, Australia to be sold?

A New Zealand casino in Australia, Darwin Hotel, and Casino resort might be sold soon, due to severe financial struggles. The casino industry is facing problems, hence SKYCITY Entertainment Group is considering selling the gaming portion of the resort.

In 2014 SKYCITY Entertainment Group purchased the property from American gambling operator MGM Resorts International, for the amount of 195 million Australian dollars. The venue is located in Australia’s Darwin City and comprises a casino with several gaming tables and pokies, a five-star hotel and a many accommodation and entertainment options.

SKYCITY has explained the decrease in the revenue coming in from the casino operations with the factor that poker machines can now be found in many pubs and clubs near the resort as well as the proliferation of online casino. Many find it easier and more convenient to pass by their regular pub to play a few hands of poker, instead of going to an actual casino. Gambling machines have become increasingly popular in the Northern Territory of Australia, hence putting the local casinos under a lot of pressure.

It is worth mentioning that the hotel and casino manager has previously spoken against selling the gambling operations part of its business, despite the tough financial times the company was facing. However, shortly after the publication of the results of the 2017 financial year in August, the news about the potential sale was released.

SKYCITY has properties in Auckland, Hamilton, Queenstown, and also in Adelaide in South Victoria. The company has considered holding a gambling licence very valuable, and hence the news about the prospective sell have come as a surprise.

Even though gambling at foreign casino sites is illegal in New Zealand, online casino is widely played, and many kiwi-players choose to play at one of the international online casinos. Many online casinos have developed programs and bonus offers designed especially for players coming from New Zealand, as the market carries a high customer value.